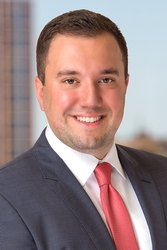 Prior to joining Lite DePalma Greenberg, Francis served as a law clerk to the Honorable Carmen Messano, P.J.A.D., presiding judge of the Superior Court of New Jersey, Appellate Division.

While in law school, Francis served as a legal fellow for the City of Jersey City’s Department of Law, as a law clerk for the Hudson County Prosecutor’s Office and as a judicial intern for the Honorable Katharine S. Hayden in the United States District Court for the District of New Jersey. Francis was highly involved as a student advocate in Seton Hall University School of Law’s Civil Rights and Constitutional Law Clinic, where he represented clients in a federal class action lawsuit against the State of New Jersey.

Francis is currently a part-time student in Rutgers University’s School of Public Affairs and Administration’s (“SPAA”) Master of Public Administration program, where he is honing his ability: (1) to provide advice to the firm’s clients on matters of public policy and public affairs; (2) of consulting the firm’s governmental clients on the legal ramifications of new or proposed legislation; and (3) in providing proactive approaches to deal with potential problems in the various governmental areas including human resources, labor relations and management of public organizations.

October 10, 2019
Employers beware: Wage-history questions are out of the question.
A new wage equity law that affects employers and workers alike will soon take effect in New Jersey. The law forbids employers from screening job applicants based on the applicant's prior salary history, which includes prior wages, salary and benefits.

May 9, 2019
A Heavy Burden: Court Determines Obesity Alone is Not A Disability Under LAD
Obesity has become a serious health problem in the United States, with more than one-third of the population being obese. It has been labeled a national epidemic by the Centers for Disease Control and Prevention ("CDC"), and it is now considered a chronic disease by many reputable medical organizations, including the American Medical Association ("AMA"), the National Institutes of Health, and the American Association of Clinical Endocrinologists, to name a few. According to the CDC, "[o]besity-related conditions include heart disease, stroke, type 2 diabetes and certain types of cancer that are some of the leading causes of preventable, premature death." In the workplace, decreased productivity and increased absenteeism due to obesity is a huge economic burden on our society.

November 8, 2018
No Pain? No Gain. New Jersey Workers Are Entitled to Paid Sick Leave.
Americans overwhelmingly sympathize with workers who need to be able to take time off of work without penalty. States across the nation, including New Jersey, have started to implement comprehensive legislation aiming at providing paid sick leave to employees.

May 10, 2018
Thinking of filing an NJLAD claim against a bi-state agency? Think again.
The Third Circuit Court of Appeals has not yet addressed the question of whether a bi-state agency is subject to suit under the New Jersey Law Against Discrimination. However, despite some befuddlement by hopeful litigants, the lower federal courts and the New Jersey state courts have consistently held that the answer is a resounding "no".

January 18, 2018
Gov. Murphy to Continue Criminal Justice Reform Efforts
Over the last two decades, New Jersey has become a trailblazer in criminal justice reform. New Jersey's prison population has been reduced by a staggering 26 percent since 2000, and crime has fallen by 30 percent. Not only has the state reduced its prison population, its recidivism rate is also lower than the national average – 31 percent in the state, compared with 40 percent nationally. For some time, criminal justice reform has been considered a noble bi-partisan cause in New Jersey political circles, and many governors and legislators, both Democrat and Republican alike, can take credit for the change.

September 21, 2017
The Unfortunate Truth in Establishing a Hostile Work Environment Claim
Have you "heard through the grapevine" that a co-worker has been making racist remarks about you? If your answer to this question is a resounding "yes," then you likely believe you have a valid racial discrimination lawsuit against your co-worker and employer. Not so fast.

February 16, 2017
Offer of Judgment: "An offer you CAN refuse"
Virtually everybody agrees that litigation costs have skyrocketed over the years. Often the fees at issue dwarf the underlying damages alleged in the case. As a result of this trend, New Jersey's Offer of Judgment Rule was developed with the primary goal of encouraging, promoting and stimulating the early settlement of disputes by imposing drastic consequences on parties that fail to accept reasonable offers to settle. R. 4:58.

November 3, 2016
A Millennial's Voting Nightmare: No Selfies in the Voting Booth
With only a few days left in the 2016 presidential race, the bitter war between candidates is coming to an abrupt end. Behind the scenes, however, there is another battle brewing in federal courtrooms and state legislative chambers across the United States regarding the constitutionality of state laws banning the taking of selfies in voting booths. In the last decade, social media has become an integral part of our lives, and the so called "ballot selfie" question has become an increasingly popular topic in the law.