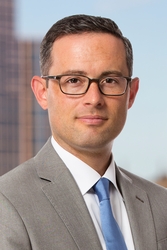 Jeremy Nash is Counsel with Lite DePalma Greenberg & Afanador in its Newark, New Jersey office. He has been representing plaintiffs in consumer and securities class actions around the United States for over 10 years.

Jeremy also serves as Director of Case Development. In that capacity, he investigates and develops new class action cases, and works with other members of the Class Action Litigation Practice Group to advance litigation. Jeremy is often the first point of professional contact for prospective clients and other referral sources, and has extensive experience working with current and prospective class members.

“In many ways,” says Jeremy, “communication is the most important part of my job as a class action litigator. The ability of our client to represent the class, of defense counsel to understand the merits of our arguments, and of the Court to appreciate why our case is important—these things all hinge on my ability to tell the story.”

Jeremy has a great track record as a consumer class action attorney. He currently represents over 10 million people in Mendez v. Avis Budget Group, Inc., No. 11-cv-6537 (D.N.J.), a breach of contract and consumer fraud class action pending in New Jersey federal court (Law360), and hundreds of thousands of people in Bakov v. Holiday Cruise Line, No. 15-cv-2980 (N.D. Ill.), a robocall class action pending in Illinois federal court (Bloomberg). He is preparing both cases to go to trial in 2020.

In Bakov, he obtained summary judgment in favor of the class. The Court ruled that the defendant had violated the Telephone Consumer Protection Act (TCPA) and that its violations were willful and knowing. In granting the motion, the Court remarked that, based on the evidence Jeremy offered in support of the motion, “Defendant’s illegal conduct seems to be part of a pattern, and that pattern should not be ignored.”

Jeremy’s experiences as a securities and cryptocurrency class action attorney are also noteworthy. Jeremy was a member of lead counsel’s trial team in In re Vivendi Universal, S.A. Securities Litig., No. 02-cv-5571 (S.D.N.Y.), one of only a handful of securities fraud cases tried to a favorable jury verdict in the last 20 years. The jury verdict in that case was valued at over $9 billion (NY Times).

Today, Jeremy represents plaintiffs in In re Tezos Securities Litig., No. 17-cv-6779 (N.D. Cal.). They allege that the Tezos initial coin offering (Tezos ICO), which raised the equivalent of hundreds of millions of dollars, was an illegal securities offering under U.S. law (Bloomberg).

Though not a securities class action, Jeremy also represents the plaintiffs in Faasse v. Coinbase, Inc., No. 18-cv-1382 (N.D. Cal.), in which plaintiffs allege that, in violation of California state and common law, Coinbase wrongfully kept for itself bitcoin and other cryptocurrencies that its users transferred to non-coinbase users.

In addition to seeing cases through to trial, Jeremy is accumulating successes as an appellate attorney. He recently prevailed on an appeal to the Seventh Circuit asking that a product liability claim against Danze, Inc, which manufactures plumbing parts, be reinstated. Duncan Place Owners Association v. Danze, Inc., No. 17-3474 (7th Cir. Jun. 16, 2019). The case has been remanded to the district court for further proceedings.

In Vivendi, he helped secure the Second Circuit’s affirmance of the jury verdict, an “inflation maintenance” theory of loss causation, and other important trial court rulings. In re Vivendi, S.A. Sec. Litig., 838 F.3d 223 (2d Cir. 2016).

In State of Minnesota v. Sanofi Aventis, No. 18-cv-14999 (D.N.J.), for instance, Minnesota was prepared to allege that several drug manufacturers located in New Jersey acted improperly to increase the cost of insulin products in violation of Minnesota law and the Racketeer Influenced and Corrupt Organizations Act. The State’s complaint, however, would contain the confidential results of its pre-litigation investigation and could not be filed publicly. Jeremy was appointed a Special Attorney of the State to, among other things, help it navigate New Jersey local practice in order to file the complaint under seal and to negotiate a protective order with the defendants to govern access to the sealed complaint (Reuters).

Jeremy’s unique local New Jersey counsel practice is also reflected in the retention by a subsidiary of the Whitesell Group in In re Application of WG TOPCO S.a.r.l. for an Order Pursuant to 28 U.S.C. § 1782 to Conduct Discovery for Use in a Foreign Proceeding, No. 18-cv-4105 (D.N.J.). The point of this action is to obtain discovery from Volkswagen, located in New Jersey, under 28 U.S.C. § 1782 to further foreign litigation against BMW. Not only are few attorneys familiar with the Section 1782 application process, but this action, like the complaint filed for Minnesota, had to be commenced under seal.

Call Jeremy today for a case evaluation at (973) 877-3815 or email him at jnash@litedepalma.com. He evaluates potential class actions free of charge.

Jeremy is a member of the Association of the Federal Bar of New Jersey and speaks on topics related to class litigation for continuing legal education (CLE) programs. He was a panelist recently for a CLE program entitled, “Summary Judgment in Class Action Litigation: Plaintiff and Defense Strategies for Filing Motions” (program materials).

*No aspect of this advertisement has been approved by the Supreme Court of New Jersey. See Award Methodology.

September 26, 2019
Defaults and Default Judgments in the Federal Courts
What "Default Judgment" Means A "default judgment" is the kind of judgment generally entered in cases where one party fails to show up to defend a lawsuit.

October 11, 2018
Absent Class Member Discovery Is Rarely Appropriate
Defendants in class actions sometimes seek to take discovery of "absent" class members. Those are members of a proposed or certified class who are not directly involved with the litigation. This type of discovery is generally not allowed. After all, one of the principal advantages of class actions over massive joinder or consolidation would be lost if all class members were routinely subject to discovery. Most courts thus limit discovery against unnamed class members, but do not forbid it altogether.

May 3, 2018
In first ever cryptocurrency securities class action, appointment of lead plaintiff is business as usual
The Court presiding over In re Tezos Securities Litigation, No. 17-cv-6779-RS (N.D. Cal.), the first ever class action alleging violations of U.S. federal securities laws arising from an initial coin offering ("ICO"), recently appointed an individual investor to serve as lead plaintiff.

January 11, 2018
Beyond the Hague Convention: Other Methods Of Serving Process On Foreign Defendants
Defendants located outside the United States are often named in securities and other types of class actions, which raises a sometimes confounding question: How to effect service of process?

September 14, 2017
Money In Your Pocket: Shifting The Cost Of Class Notice To Defendants
In class actions, the usual rule is that the plaintiff must initially bear the cost of sending notice to the class, which can amount to hundreds of thousands of dollars, depending on the size of the class and type of notice program. As the name suggests, there are exceptions to the usual rule and, if you represent plaintiffs in class actions, it pays to know them.

May 25, 2017
Class Counsel Should Not Overlook Relevance In Resisting Demands For Engagement Letters
Defendants in class actions typically demand copies of plaintiffs' engagement letters under the theory that they might reveal a conflict of interest that undermines plaintiffs' ability to represent the class and thus plaintiffs' ability to satisfy the "adequacy" of representation requirement of Federal Rule of Civil Procedure 23(a)(4).

January 25, 2017
New Jersey Removes Impediment to Multistate Certification of Class Actions
The presumption in New Jersey is now that its statute of limitations governs claims pursued in the jurisdiction, eliminating an impediment to pursuing certain matters here—like some multistate class actions—that implicate the laws of two or more states.

October 27, 2016
Sixth Circuit: Risk of Fraud Following Data Breach Establishes Standing
Data theft is on the rise in this country and around the world, as the sophistication of hackers and the illicit markets for stolen information grow. Unfortunately, some courts have stumbled over what should be a simple question when consumers take steps to protect themselves: if their data has been stolen but they have not actually been the victim of fraud, do they have standing to sue the company that was supposed to safeguard their data? The Sixth Circuit recently joined a number of other circuit courts in finding that, since the likelihood that fraud will follow the theft of names, birthdates, social security numbers, and credit card information is a virtual certainty, the answer to that question must be yes.

July 21, 2016
Pre-certification Motions for Summary Judgment in Class Action Litigation
Defendants in class action lawsuits often seek a summary judgment ruling before plaintiffs have moved for class certification, but it is always a gamble to do that. Defendants who go down that road and who are fortunate enough to prevail have bound only the named plaintiff. They still run the substantial risk that a member of the proposed class will pick up the spear and take the place of the original plaintiff by filing a subsequent action.