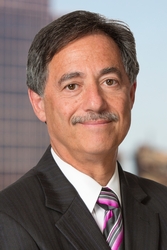 Steven is also an accomplished litigator, and has represented clients at trial, in settlement negotiations and in arbitration. He has successfully advised clients in a broad range of matters, including employment and labor disputes, and law enforcement investigations.

“Employers face new labor and employment challenges every day,” says Steven. “Federal and state laws and regulations are always in flux. I draw on my decades of experience to help clients prevent and resolve disputes and, wherever possible, align the goals of employers and their employees.”

In 2012, Steven was recognized by Inside New Jersey as one of “New Jersey’s Top Legal Minds,” for the quality of his legal counsel and his high level of client service. In 2015, Steven was rated as a “Top Rated Lawyer in Labor & Employment Law for Ethical Standards and Legal Ability” by Martindale-Hubbell® and was also recognized by Martindale-Hubbell® as an “AV Preeminent® Peer Review Rated Attorney for Thirty Years.”

August 15, 2019
WHAT WE HAVE HERE IS A FAILURE TO ACCOMMODATE - OR NOT!
The New Jersey Law Against Discrimination ("NJLAD") is a very broad-based piece of legislation, liberally construed, to eliminate the "cancer of discrimination" Fuchilla v. Layman, 109 N.J. 319 (1988). The purpose of both the NJLAD and the Federal statute that it mirrors, the Americans With Disabilities Act ("ADA"), is to: (1) prevent discrimination against individuals with disabilities; (2) protect the rights of these individuals; and (3) provide them with an avenue to seek assistance in protecting these rights through the courts.

August 2, 2018
EMPLOYMENT AT WILL: BEWARE OF EXCEPTIONS
All too often employers read or hear about a law or case in their favor and run to apply it to their circumstances without further review or research. In many situations, however, there are exceptions to the "black letter" law or a court's decision. Such is the case with the doctrine of "employment at will".

March 22, 2018
BIFURCATION IN EXCESSIVE FORCE CASES
Excessive force cases under the federal Civil Rights Act, 42 U.S.C. §1983 against police officers are being argued with greater frequency based upon Monell v. Department of Social Services, 436 U.S. 658 (1980). This allows plaintiffs' attorneys to introduce evidence related to a "pattern and practice" of a police department that otherwise, in a majority of cases, would be inadmissible as to the actions of the police officer or officers in the specific case being tried. To avoid such undue prejudice, a motion to bifurcate is warranted.

August 10, 2017
Mcdonnell Douglas Modified For Discrimination Claims Based On Disability - A Grande Roadmap
On July 12, 2017, the Supreme Court of New Jersey issued a decision in Maryanne Grande v. Saint Clare's Health System, outlining the steps for evaluating discrimination cases based on disability. The Court recognized the three-step analysis required pursuant to McDonnell Douglas Corp. v. Green, 411 U.S. 792 (1973). The first step requires that a plaintiff establish a prima facie case. If the first step is met, the second step requires the employer to establish the reasonableness of the otherwise discriminatory act or advance a non-discriminatory reason for the employee's discharge. If the second step is met, the third step requires the employee to prove by preponderance of the evidence that the reason proffered by the employer "was not the true reason the employment decision but was merely a pretext for discrimination."

April 20, 2017
Monell: Past Can Be Prologue
When governmental entities are forced to defend against claims asserted under 42 U.S.C. §1983, the breadth and liberal interpretation of this statute renders defense difficult in the eyes of a jury.

December 29, 2016
Progressive Discipline
While many employers are familiar with the term "progressive discipline," only a relative few fully comprehend its true meaning. Unions and employees would have employers believe that if an employee engages in misconduct, no matter the severity, the employer must start with minor discipline, i.e., oral warning, written warning, or small suspension. However, as in Gilbert and Sullivan's Mikado, progressive discipline simply requires that the punishment must fit the crime. .

September 22, 2016
TELL THE TRUTH!!
In the movie "Concussion", all Will Smith wanted the NFL to do was "Tell the truth". That sentiment would be good advice for public employees, especially law enforcement officers. In In The Matter of Angel Reillo Camden County Police Department, Docket No. A-1216-14T1 (App. Div. Aug. 4, 2016), the Appellate Division weighed in on the significance of a law enforcement officer being truthful or, in the negative, of being charged with untruthfulness.

June 23, 2016
Beware of Hidden Recording Devices
With the expansion of social media and with the ever increasing enhancements in recording devices, the ability and desire of employees to record conversations with their employers has increased exponentially. The question is: Do employees have the right to surreptitiously record conversations with their employers? Unfortunately, for employers, the answer is YES!

March 10, 2016
Pay Heed to Payton
When established case law lies fallow, many times it becomes forgotten. Then, when it becomes applicable, parties fail to abide by its constructs. Such could be the case with Payton v. New Jersey Turnpike Authority, 148 N.J. 524 (1997).

December 10, 2015
Removing A Public Employee Who Is Unfit For Psychological Reasons
Public sector employers, especially those jurisdictions covered by the New Jersey Civil Service Commission, have wrestled with the issue of how to meet the burden of proof necessary to establish that an employee is unfit for duty for psychological reasons. While removal of an employee on the basis of being physically unfit for duty is relatively easy to establish, lack of fitness for duty for psychological reasons is more difficult to prove